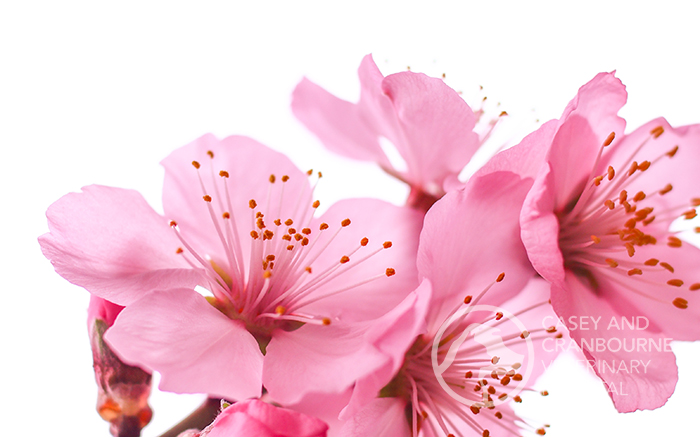 This is an article taken from an American Pet Poison Helpline detailing the top twelve plants that are found to be most poisonous to pets. 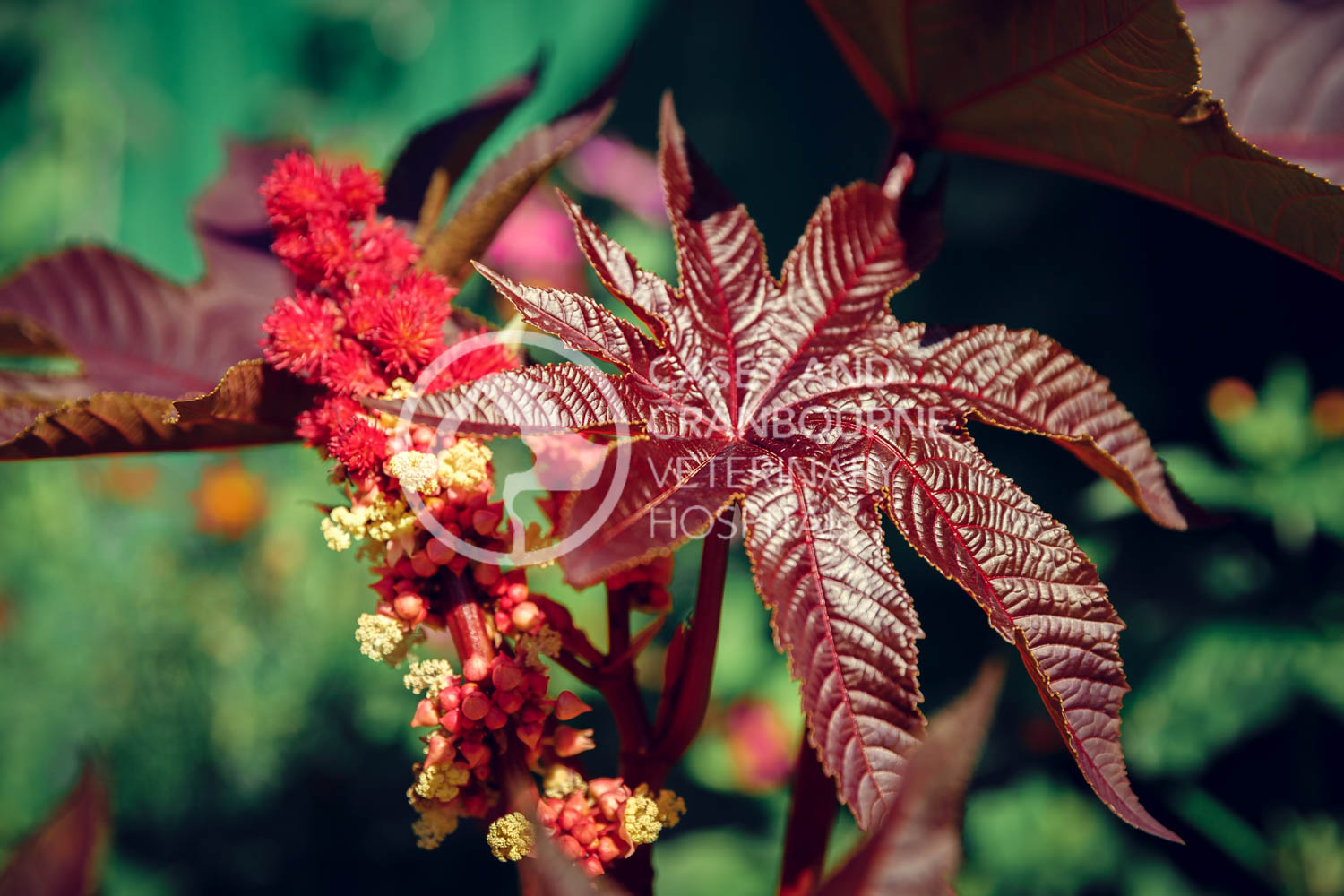 The castor beans are extremely toxic causing oral irritation, burning of mouth and throat, increase in thirst, vomiting, diarrhoea, kidney failure, convulsions. Access to ornamental plants or pruned foliage most common in poisonings. Ricin is a highly toxic component that inhibits protein synthesis; ingestion of as little as one ounce of seeds can be lethal. Signs typically develop 12 to 48 hours after ingestion and include loss of appetite, excessive thirst, weakness, stomach cramps, trembling, sweating, loss of coordination, difficulty breathing, progressive central nervous system depression and fever. As syndrome progresses, bloody diarrhoea may occur, and convulsions and coma can precede death.

There are two Crocus plants: one that blooms in the spring (Crocus species) and the other in the autumn (Colchicum autumnale). The spring plants are more common and are part of the Iridaceae family. These ingestions can cause general gastrointestinal upset including vomiting and diarrhoea. These should not be mistaken for Autumn Crocus, part of the Liliaceae family, which contain colchicine. The Autumn Crocus is highly toxic and can cause severe vomiting, gastrointestinal bleeding, liver and kidney damage, and respiratory failure. If you’re not sure what plant it is, bring your pet in to the clinic immediately for care. Signs may be seen immediately but can be delayed for days. 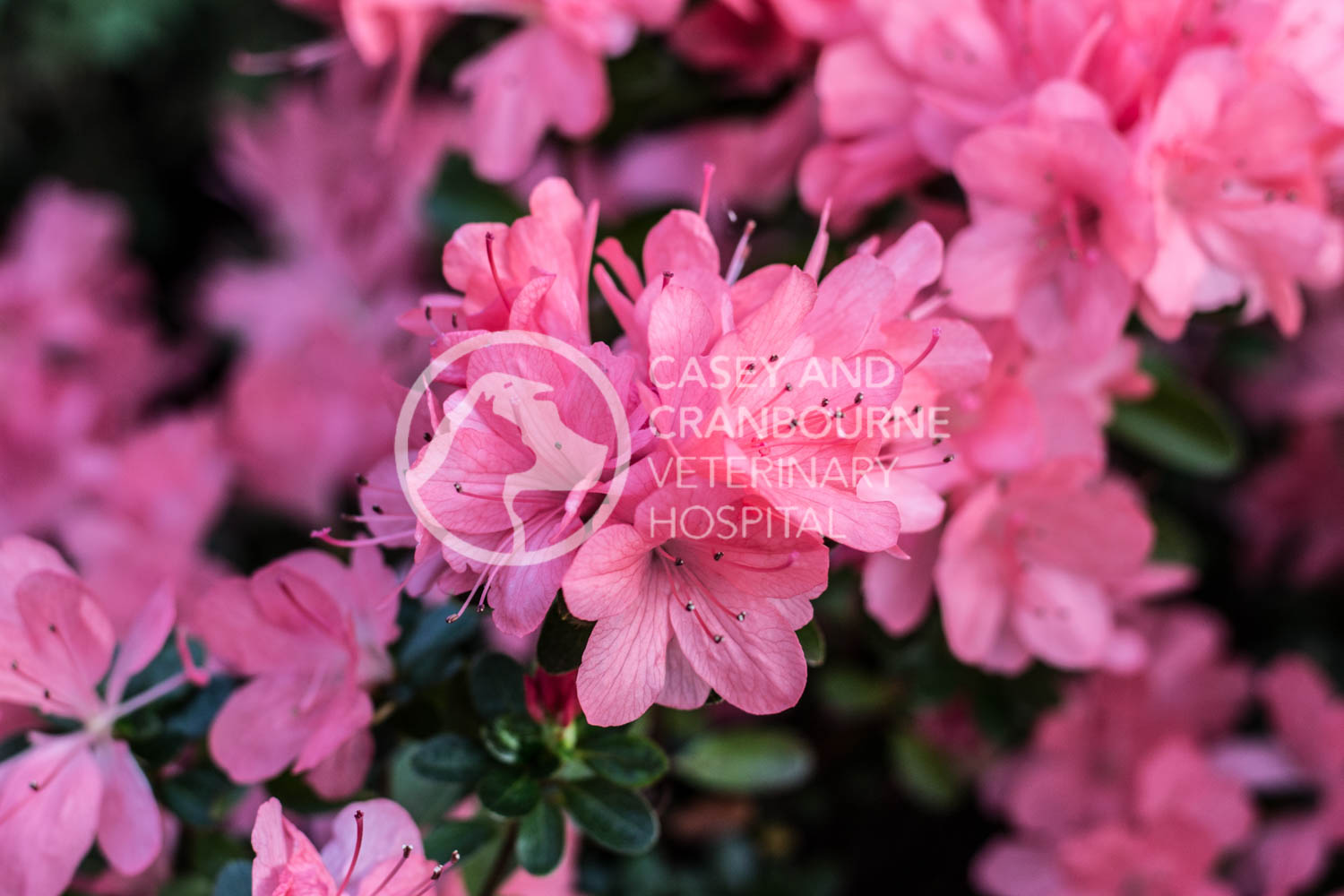 In the same family as rhododendrons, azaleas can have serious effects on pets. These plants contain grayanotoxins which disrupt sodium channels affecting the skeletal and cardiac muscle. All parts of the plant are considered poisonous, and ingestion of as little as 0.2% of an animal’s body weight can result in poisoning. Eating even a few leaves can result in vomiting, diarrhoea and excessive drooling; without immediate veterinary attention, your pet could fall into a coma and possibly die. The overall prognosis is fair with treatment. 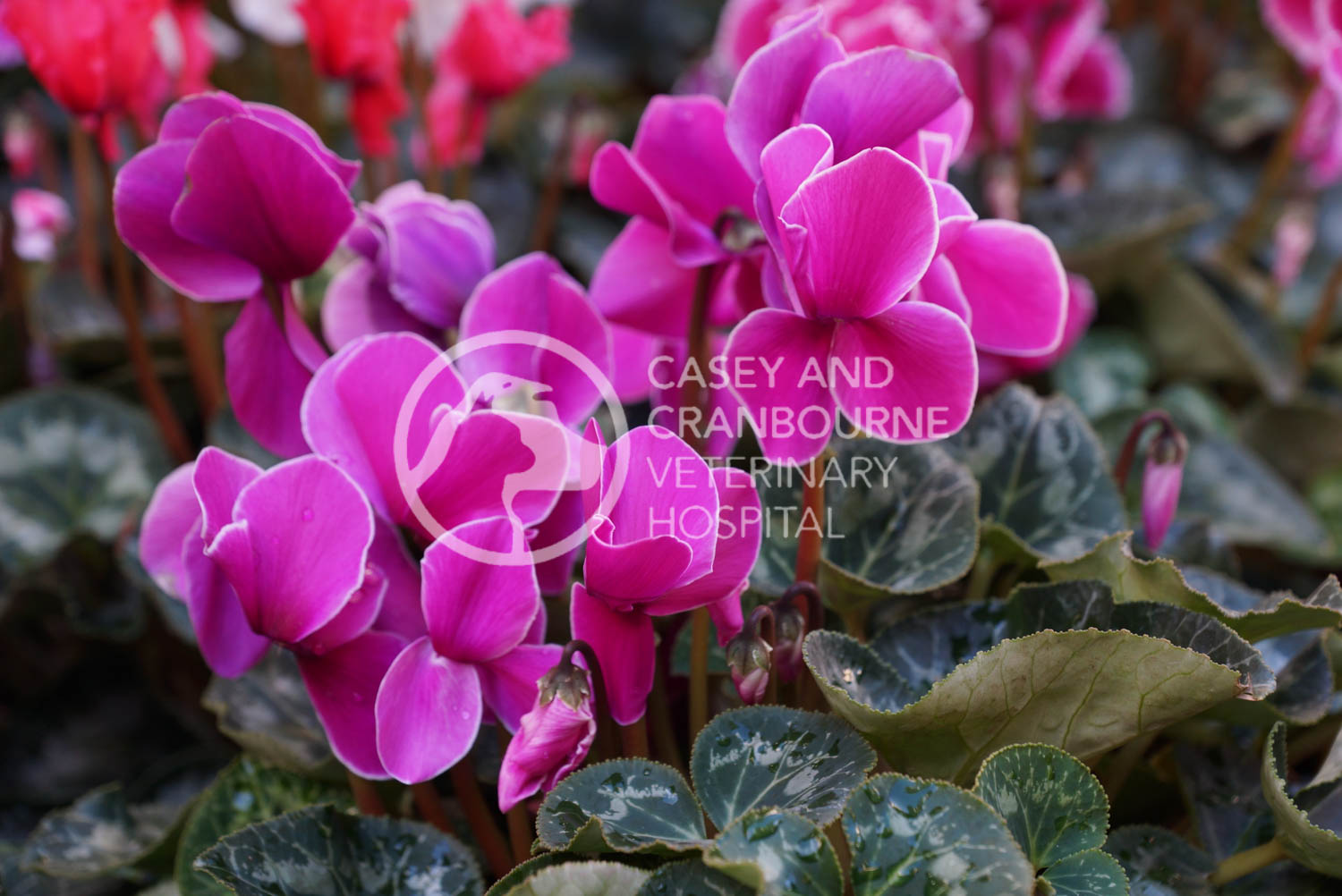 The cyclamen is a beautiful houseplant commonly sold in supermarkets. It is also called the Persian violet and Sowbread. Cyclamen contains irritating saponins, and when any part of the plant (especially the tubers or roots) are chewed or ingested by dogs and cats, it can result in clinical signs of drooling, vomiting and diarrhoea. With large ingestions, these plants can result in cardiac problems (e.g. abnormal heart rate and rhythm), seizures and death. 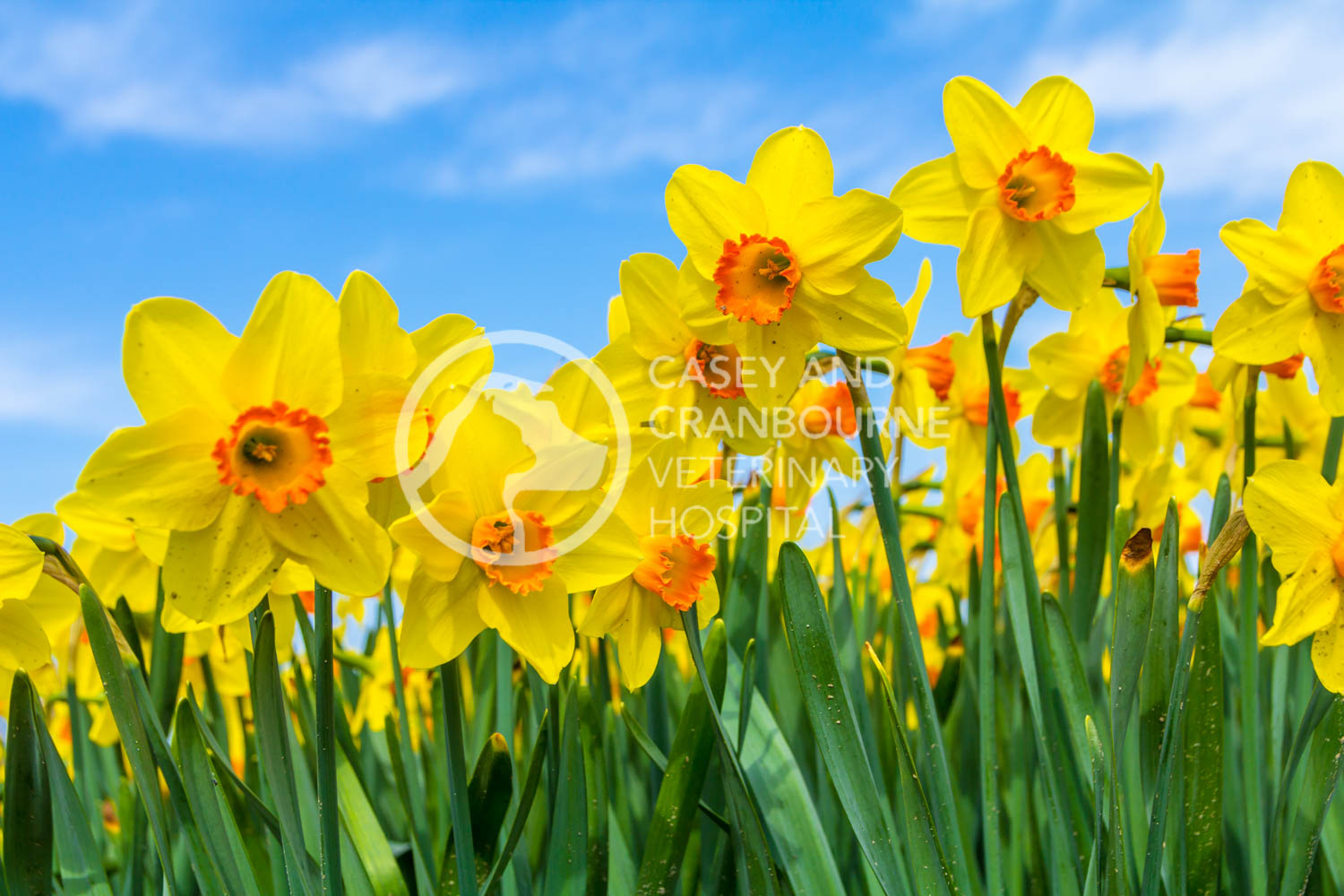 These flowers contain lycorine, an alkaloid with strong emetic properties (something that triggers vomiting). Ingestion of the bulb, plant or flower can cause severe vomiting, diarrhoea, abdominal pain, and even possible cardiac arrhythmias or respiratory depression. Crystals are found in the outer layer of the bulbs, similar to hyacinths, which cause severe tissue irritation and secondary drooling. Daffodil ingestion can result in more severe symptoms so if an exposure is witnessed or symptoms are seen, we recommend seeking veterinary care for further supportive care.

Popular in many homes and offices, Dieffenbachia species contain insoluble crystals of calcium oxalate called raphites. Chewing or biting into the plant releases the crystals which penetrate tissue resulting in injury. When dogs or cats ingest insoluble calcium oxalate-containing plants, clinical signs may be seen immediately and include pawing at face (secondary to oral pain), drooling, foaming, and vomiting. Moderate to severe swelling of the lips, tongue, oral cavity, and upper airway may also be seen, making it difficult to breathe or swallow. 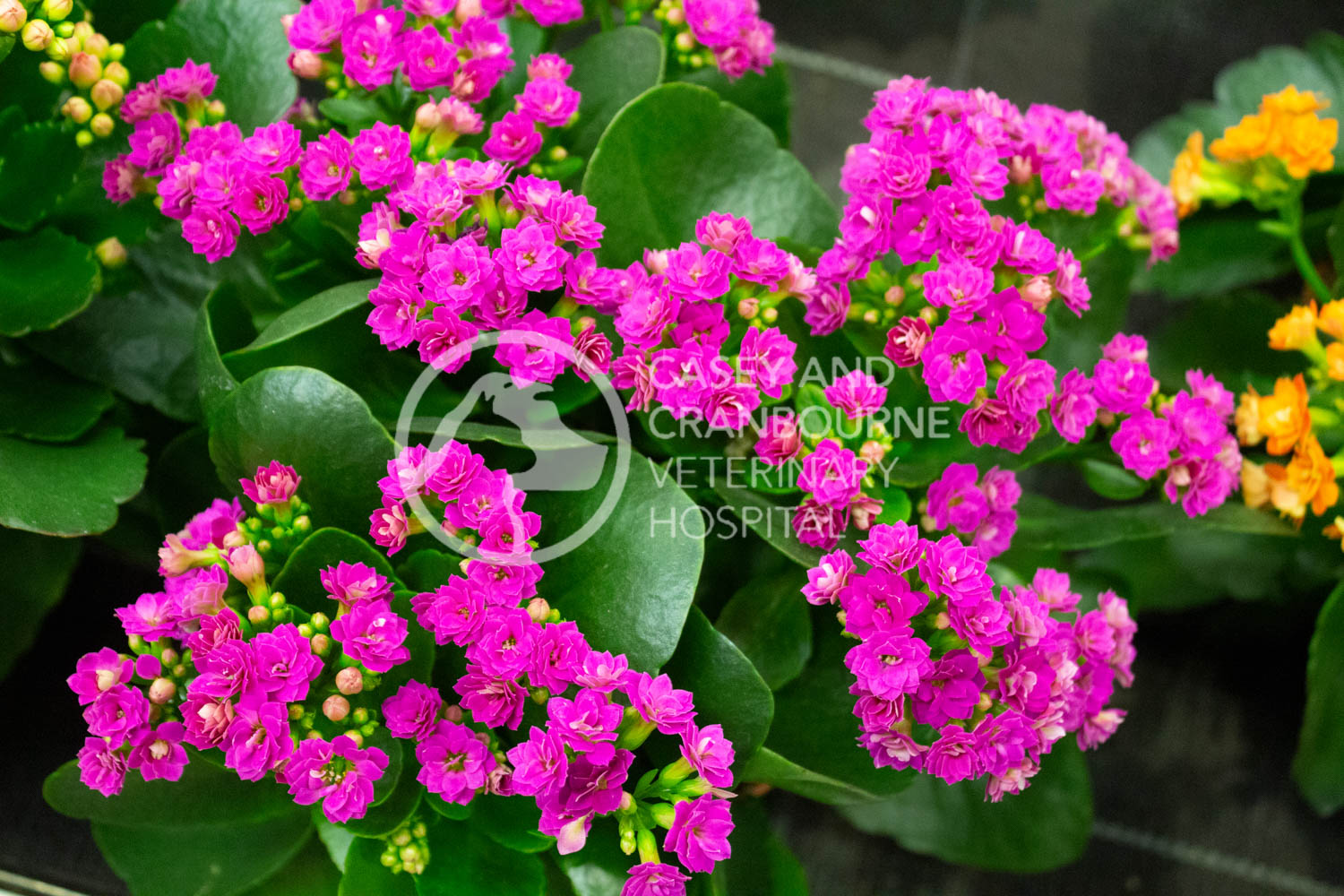 Kalanchoe is a common, beautiful houseplant with hundreds of flowers (which range from yellow, red, pink, etc.). All parts of the plant are generally considered toxic – even the water in the vase has been reported to cause toxicosis. Clinical signs from ingestion include cardiovascular signs (e.g., abnormal heart rhythm and rate), electrolyte abnormalities (e.g., a life-threatening high potassium level), gastrointestinal signs (e.g., nausea, drooling, vomiting, etc.), or central nervous system signs (e.g., dilated pupils, tremors, seizures). In severe cases, an expensive antidote, digoxin-specific Fab fragments, can be used for severe, life-threatening cases. 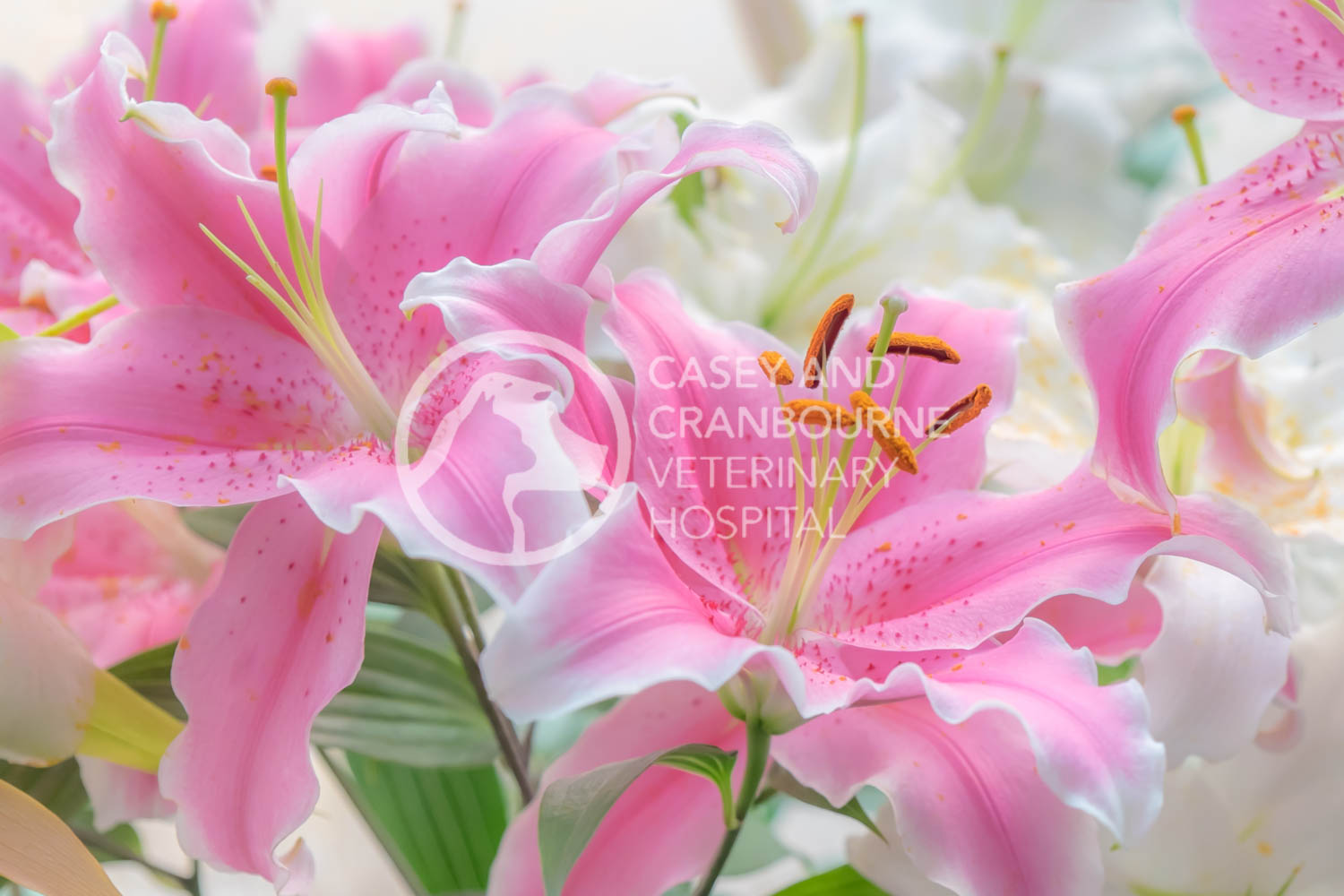 There are dangerous and benign lilies out there, and it’s important to know the difference. Peace, Peruvian, and Calla lilies contain insoluble oxalate crystals and if ingested, cause minor signs such as tissue irritation to the mouth, tongue, pharynx, and oesophagus – this results in minor drooling. The more dangerous, potentially fatal lilies are true lilies, and these include Tiger, Day, Asiatic, Easter and Japanese Show lilies – all of which are highly toxic to cats! All parts of the Lilly plant are toxic (petals, leaves, stem, stamen). Even biting into any part of the plant can result in severe kidney failure. If your cat is seen consuming any part of a lily, bring your cat (and the plant) immediately to a veterinarian for medical care. The sooner you bring in your cat, the better and more efficiently we can treat the poisoning. Decontamination (like inducing vomiting and giving binders like activated charcoal) are imperative in the early toxic stage, while aggressive intravenous fluid therapy, kidney function monitoring tests, and supportive care can greatly improve the prognosis. 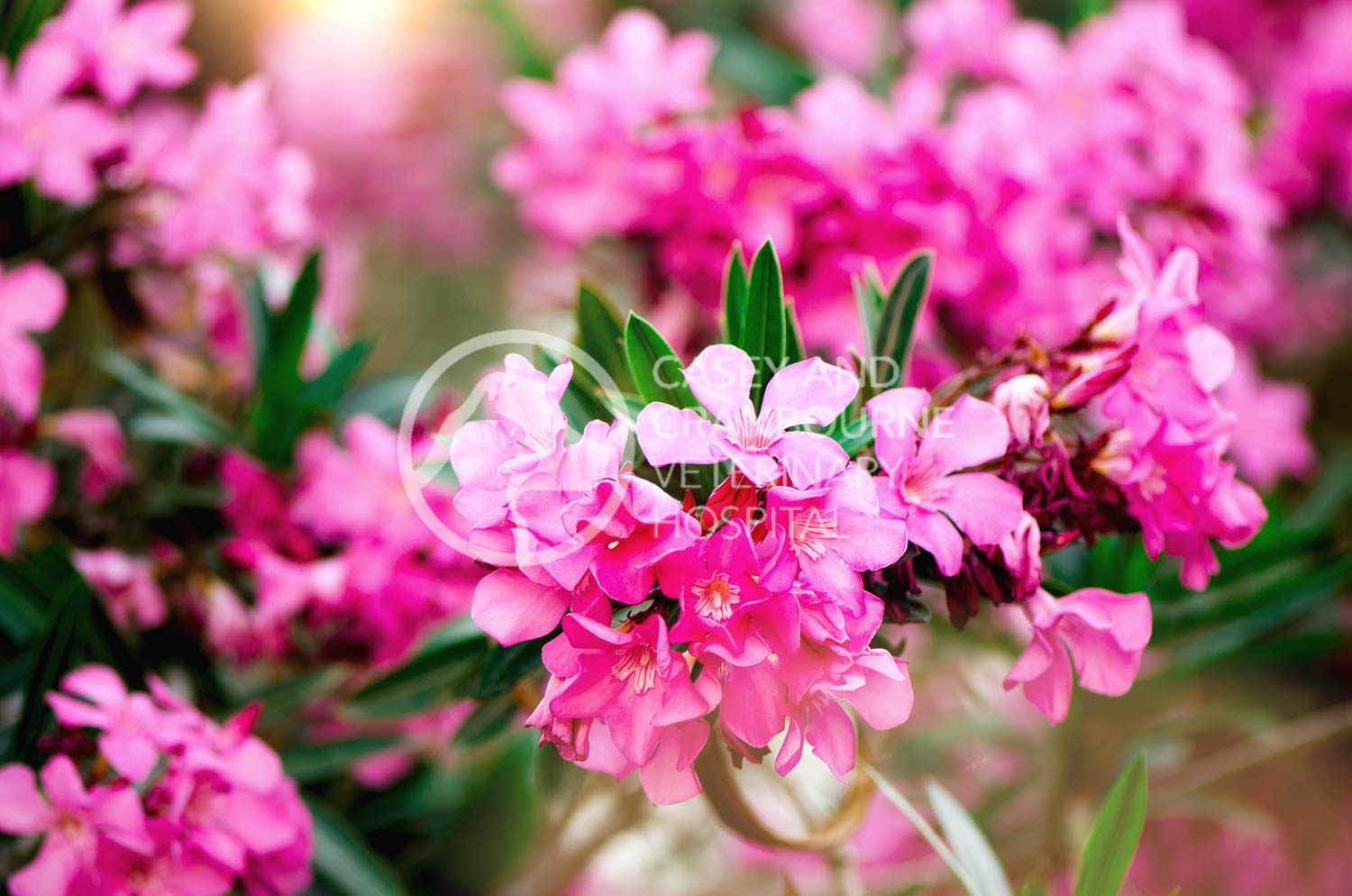 Oleander is an outdoor shrub, popular for its evergreen qualities and delicate flowers. All parts of the plant are generally considered toxic – even the water in the vase has been reported to cause toxicosis; however, the leaves and flowers are extremely toxic if ingested and can cause severe vomiting, slow the heart rate and possibly even cause death. 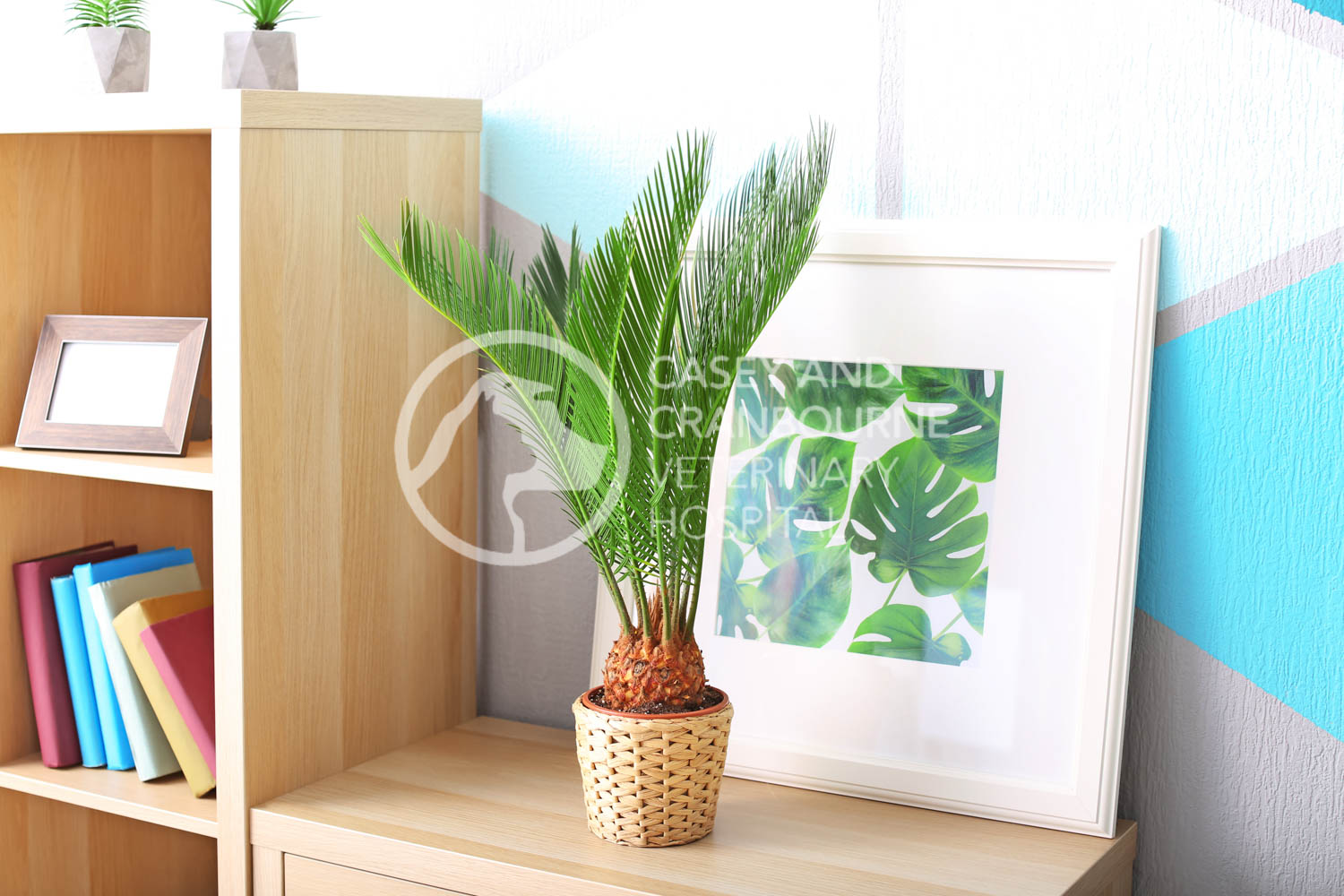 Very popular in warmer climates, this household and outdoor plant can be very harmful to pets. All parts of sago palm are considered poisonous, with the seeds (nuts) being the most toxic part of the plant. Sago palm contains cycasin, which is the primary active toxic agent resulting in severe liver failure in dogs. Ingestion results in acute gastrointestinal signs (e.g., drooling, inappetance, vomiting, diarrhea) within 15 minutes to several hours after ingestion. Central nervous system signs (e.g., weakness, ataxia, seizures, tremors, etc.) and severe liver failure can be seen within 2-3 days post-ingestion. 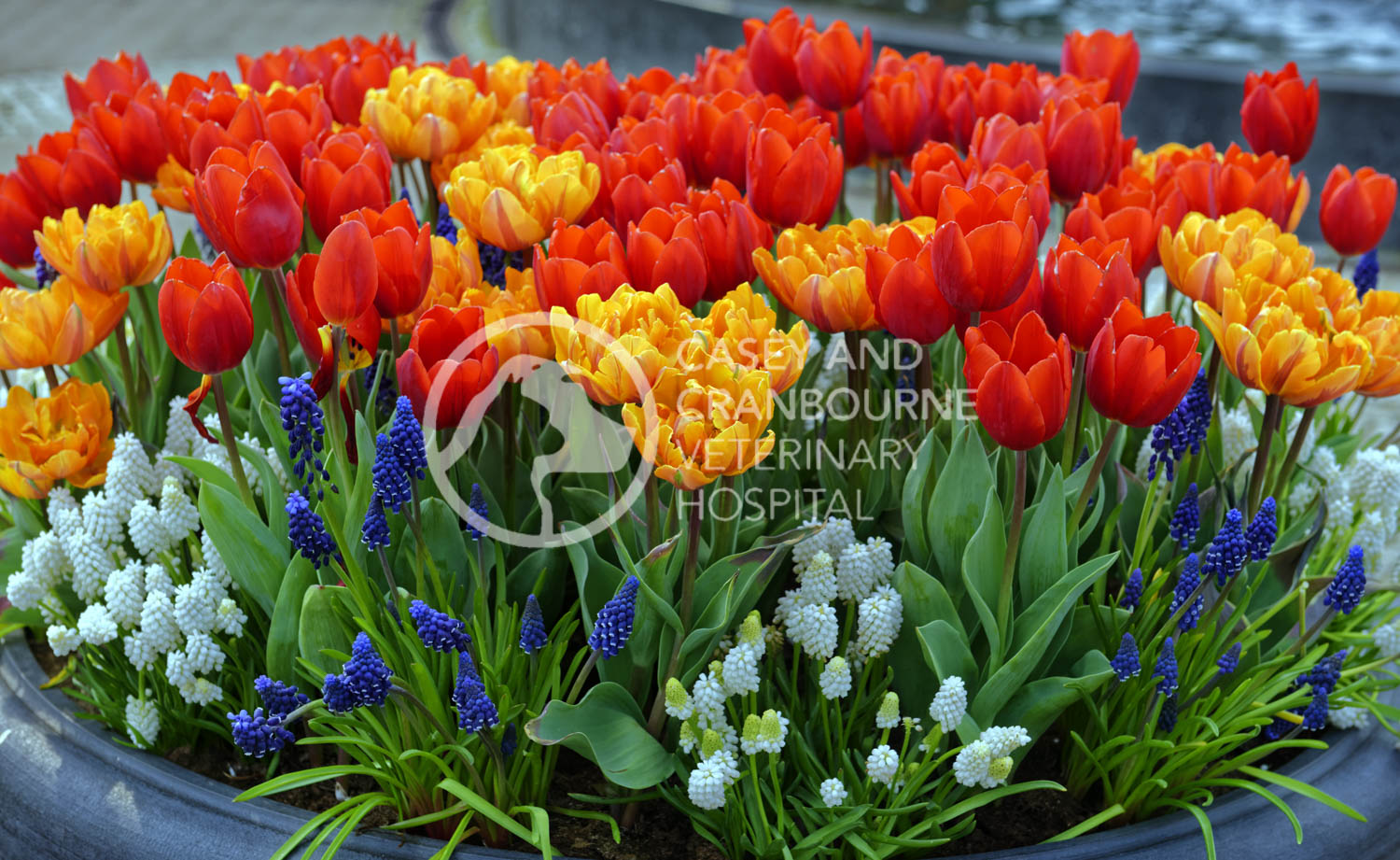 Tulips contain allergenic lactones while hyacinths contain similar alkaloids. The toxic principle of these plants is very concentrated in the bulbs (versus the leaf or flower), so make sure your dog isn’t digging up the bulbs in the garden. When the plant parts or bulbs are chewed or ingested, it can result in tissue irritation to the mouth and oesophagus. Typical signs include profuse drooling, vomiting, or even diarrhea, depending on the amount consumed. There’s no specific antidote, but with supportive care from the veterinarian (including rinsing the mouth, anti-vomiting medication, and possibly subcutaneous fluids), animals do quite well. With large ingestions of the bulb, more severe symptoms such as an increase in heart rate and changes in respiration can be seen, and should be treated by a veterinarian. These more severe signs are seen in cattle or our overzealous, chowhound Labradors. 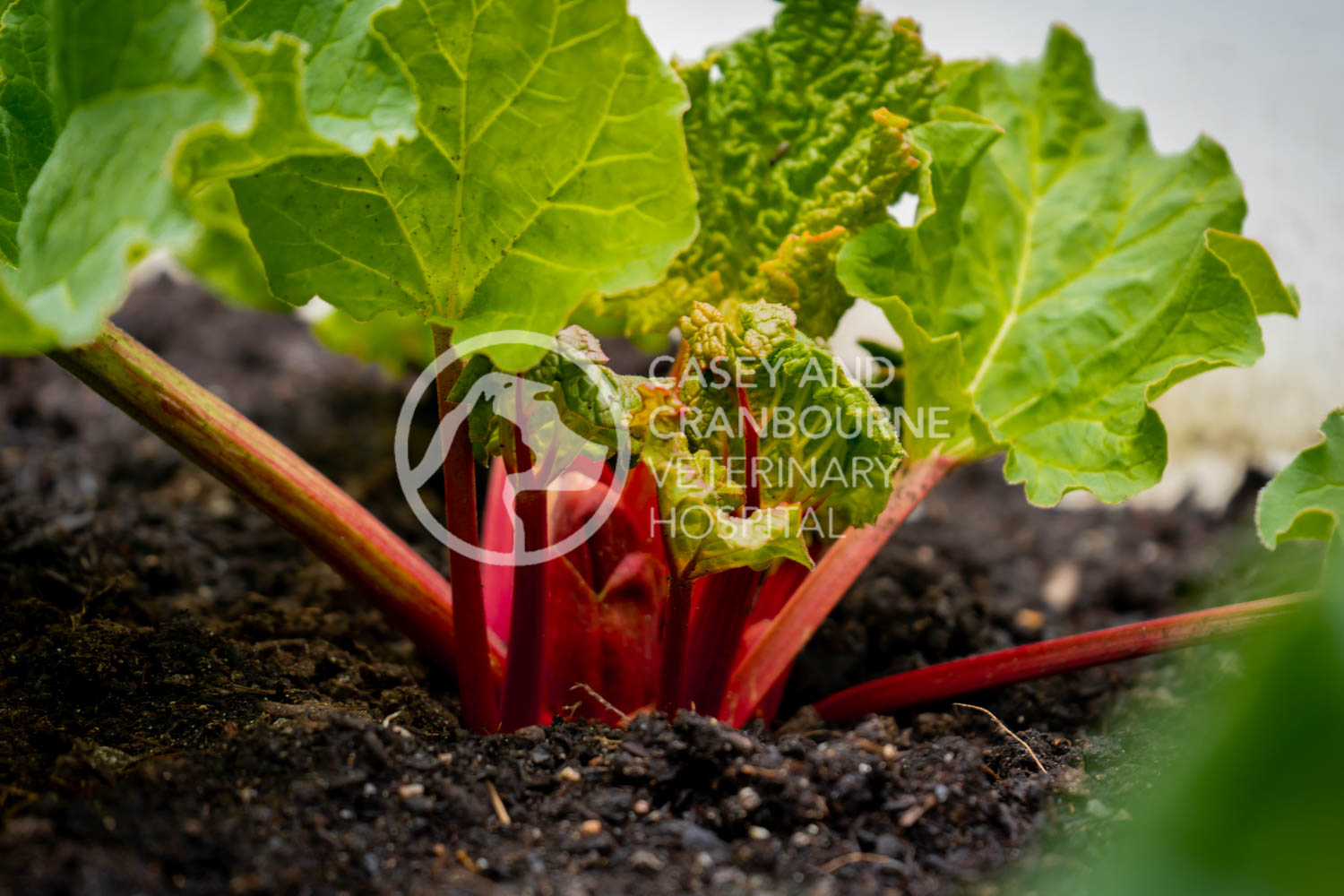 Rhubarb is a common plant grown for edible consumption, and is also known as the pie plant. The leaves contain soluble oxalate crystals, with less of the crystals being prevalent in the stalk. That’s why rhubarb stems are edible, but the leaves are not. Rhubarb is a type of soluble oxalate-containing plant (containing oxalic acid and oxalate salts), and must be differentiated from insoluble oxalate plants (which are less toxic). Examples of other soluble calcium oxalate-containing plants include star fruit and the shamrock plant. In general, soluble calcium oxalate poisoning is more commonly associated with large animals (from livestock chronically grazing). However, when ingested in large enough quantities in small animals, it can result in poisoning in dogs, cats, and even humans.

Soluble calcium oxalates are present in varying degrees in all parts of the plant. When soluble oxalate salts are absorbed from the gastrointestinal tract, they bind with body’s calcium, resulting in a sudden drop in calcium. Rarely, acute renal failure can be seen from ingestion of plants or fruit containing these soluble oxalate crystals. Clinical signs of this type of poisoning include drooling, inappetance, vomiting, diarrhoea, lethargy, weakness, tremors, bloody urine and changes in thirst and urination.