What is Feline Hyperthyroidism?

Hyperthyroidism (overactive thyroid glands) is the most common endocrine (hormonal) disorder of older cats. Though it has been recorded in cats as young as 4 years old, it is uncommon in cats under 8 years of age.

Cats have two thyroid glands which are normally situated in the neck and hyperthyroidism is caused by an increased production of thyroid hormones by these glands. In over 70% of cases, both glands are involved in the disease and become enlarged (a change called ‘nodular hyperplasia’ which resembles a very benign tumour). The underlying cause of this change is currently unknown, but is very similar to one of the two main causes of hyperthyroidism in humans called ‘toxic nodular goitre’.

In less than 2% of cases, a malignant (cancerous) tumour (thyroid adenocarcinoma) can be the underlying cause of the disease.

Interestingly, one survey in the UK puts the incidence of hyperthyroidism as high as 10% in cats over 10 years of age.

Fortunately, the vast majority of cats that develop hyperthyroidism can be treated very successfully.

Thyroid hormones are responsible for regulating many body processes and when too much hormone is produced, the clinical signs can be quite dramatic and cats can become seriously ill. Thyroid hormones also help control the body’s metabolic rate and cats with hyperthyroidism tend to burn up energy too rapidly and typically suffer weight loss despite having an increased appetite and increased food intake.

It is a multi-systemic disease which means it affects many body organs and systems, as such, hyperthyroidism can look similar to many other conditions (eg renal failure). The signs seen with hyperthyroidism may be subtle at first and may go unnoticed until they become more severe as the underlying disease progresses. Also, as hyperthyroidism mainly affects older cats, some cats will have other diseases that can complicate and even mask some of the clinical signs.

The ‘classic’ signs of hyperthyroidism are:

Mild to moderate diarrhoea and/or vomiting develop in some cats, and some will be noticeably intolerant of heat and seek out cooler places to sit. Some (especially advanced cases) may also pant when they are stressed, which is very unusual in cats.

Although most hyperthyroid cats show an increased appetite and restlessness, in some cases there may be generalised weakness, lethargy and loss of appetite. 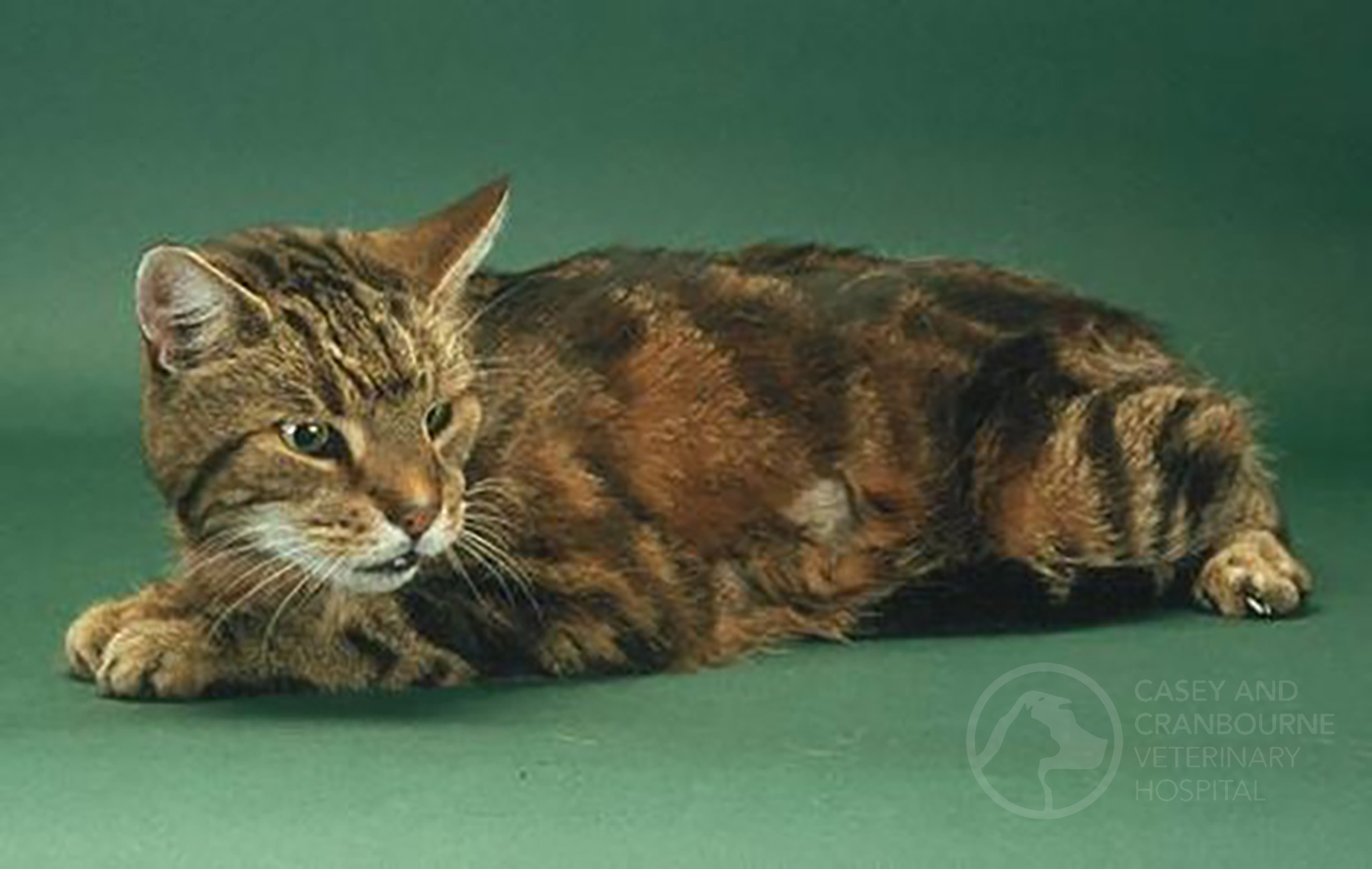 Uncontrolled hyperthyroidism has important consequences on the heart, causing an increased heart rate but also changes in the muscular wall of the heart that will eventually cause heart failure if left untreated.

Kidney disease (chronic kidney disease) does not generally occur as a direct effect of hyperthyroidism, but the two diseases often occur together because they are both common in older cats. Care is needed where both these conditions are present, as managing hyperthyroidism can sometimes have adverse effects on kidney function.

Although the thyroid glands usually enlarge with hyperthyroidism, this is not usually visible. Detection of enlarged glands will usually require careful palpation (examination by touch) by a vet. However, in some cats there is no obvious enlargement, often because the overactive tissue is in an unusual site (such as inside the chest cavity).

To confirm a diagnosis, a blood test is needed to measure the level of thyroid hormones in the blood.

Other laboratory tests may also be abnormal – for example liver enzymes are commonly increased with hyperthyroidism, and both blood and urine tests are usually advised to help rule out concurrent problems (such as kidney disease). Blood pressure should also be checked where possible with hyperthyroid cats, and an electrocardiogram (ECG – electrical tracing of heart activity), and a chest X-ray or ultrasound may be helpful where heart disease is suspected.

Successfully treated cats, irrespective of what treatment is used, will usually have complete reversal of all the signs of hyperthyroidism. Further evaluation will usually be needed to check kidney function and ensure long term control of hyperthyroidism, but most cats do remarkably well when treatment is administered. There are four main options for treatment, each with advantages and disadvantages:

These drugs are available in either tablet form or transdermal gel that is applied onto the ear tip. Medical management reduces both the production and release of thyroid hormones from the thyroid gland. They do not provide a cure however they do allow either short-term or long-term control of hyperthyroidism. In order to maintain control of the disease, medication has to be given daily, long term and quite often, is required twice or even three times a day.

The treatment dose is adjusted to effect and these drugs are usually both safe and effective. Side effects are rare but may include poor appetite, vomiting and lethargy. These side effects often resolve after the first few weeks of treatment, however if gastric irritation persists and causes continual vomiting, alternative treatment may be necessary. More serious problems (bone marrow suppression, liver disorders, or skin irritation) are highly unusual and rarely seen but are noted as uncommon side effects of anti-thyroid drugs.

In cats with other concurrent health problems such as diabetes or kidney failure, medical management of hyperthyroidism may be the best option. Even if surgery or radioactive iodine is considered (see below), drug therapy is often used initially to monitor the effect of successful treatment on kidney function.

To reduce anaesthetic and surgical complications, where possible, cats should initially be stabilised with anti-thyroid drug therapy before surgery is performed. Any significant heart disease should also be managed. The major risk associated with the surgery itself is inadvertent damage to the parathyroid glands – these are small glands that lie close to, or within the thyroid glands themselves, and have a crucial role in maintaining stable blood calcium levels. Because there is a small risk that temporary interference with calcium regulation may occur, it is usually recommended that cats remain hospitalised for a few days after surgery, and blood calcium concentrations are monitored during this time.

After surgery, occasional blood tests are recommended to ensure normal thyroid hormone levels are being maintained.

Radioactive iodine is a very safe and effective treatment for hyperthyroidism. It has the advantage of being curative in most cases with no ongoing treatment. The radioactive iodine is administered as a capsule. The iodine is taken up by the active (abnormal) thyroid tissue, but not by any other tissues, resulting in a selective local accumulation of radioactive material in the abnormal tissues. The radiation destroys the affected abnormal thyroid tissue, but does not damage surrounding tissues or the parathyroid glands.

There are no significant side-effects with this treatment, but because cats are temporarily radioactive they have to be kept hospitalised for a short period (7-10 days) after treatment as a precaution. Because this treatment requires handling of radioactive drugs it is also only available at certain centres.

A single radioactive iodine dose is curative in around 95 per cent of all hyperthyroid cats, but following treatment, occasional blood tests are recommended to ensure normal thyroid hormone levels are being maintained.

Unfortunately, cats who have concurrent renal failure are not candidates for radioactive iodine therapy.

A new option that has more recently become available for managing hyperthyroid cats is to feed them a special diet that has strictly controlled levels of iodine. Iodine is used by the thyroid gland to make thyroid hormones, so if there is only sufficient iodine in the diet to make normal levels of these hormones, this can help control the disease.

This is an interesting form of therapy that appears to be quite successful, at least in a number of cats. It does require feeding a special therapeutic diet that is only available from your vet, and cats need to consume this diet exclusively to ensure effective control. Nevertheless, many cats can have their disease controlled in this way and it is an alternative to other forms of therapy for a number of cats.

The rare cases of thyroid adenocarcinoma (malignant tumour of the thyroid) are more difficult to treat, but can sometimes be successfully managed using much higher doses of radioactive iodine.

My cat has been diagnosed with hyperthyroidism, what now?

Your cat will initially be started on oral medication to get the clinical signs of hyperthyroidism under control. We recommend a blood test one month after starting the medication to see if the dose needs to be adjusted up or down. We also check your cat’s weight and physical condition to ensure they are putting on weight and improving clinically.

Depending on how well your cat is tolerating the oral medication and how they have responded clinically will determine which option best suits your cat. It might be that we choose to keep your cat on long term oral medication, or we might choose another option such as radioactive iodine therapy or surgery.

If you have any concerns that your cat might be showing one or more of the clinical signs mentioned above, phone the clinic to book an appointment with one of our vets today.