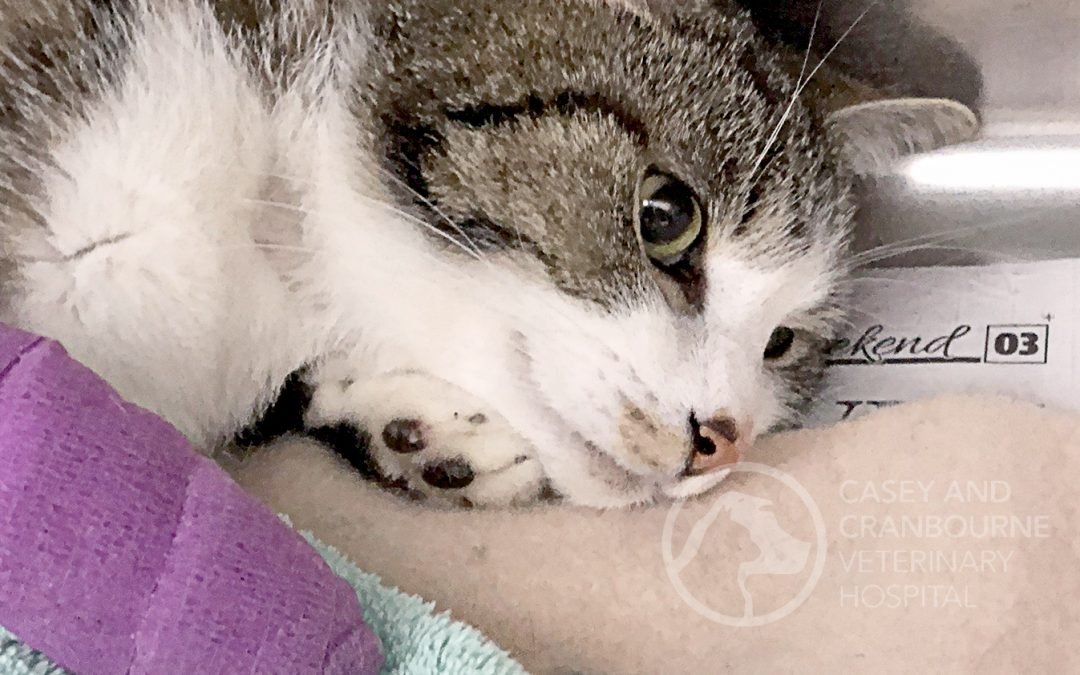 This week we have had our first snake bite of the season! A 1.5 year old cat called Milo, who presented at the clinic with weakness and lethargy, only able to walk a few steps before flopping on his side. He was noticed to be a little weak during the preceding 24 hours and this progressed overnight to flaccid paralysis with cold extremities and a low heart rate. His bloods showed a creatinine kinase (CK) level > 48,000 (normal range is between 50-300). Creatinine kinase is released when there is muscle damage and levels as high as seen with snake bite envenomation can result in damage to the kidneys, hence the reason why intravenous fluids are vital in the treatment of snake bite.  The markedly high CK level, together with Milo’s clinical signs of flaccid paralysis were enough evidence to confirm that he had been bitten by a snake. He was extremely lucky and only required one vial of Tiger/Brown Snake Combo antivenom and fluid therapy. Over the next 3 days he improved and was able to eat and walk though would still tire easily. He was discharged from hospital but given the severity of the muscle damage, it will still take him some time to return to full health. 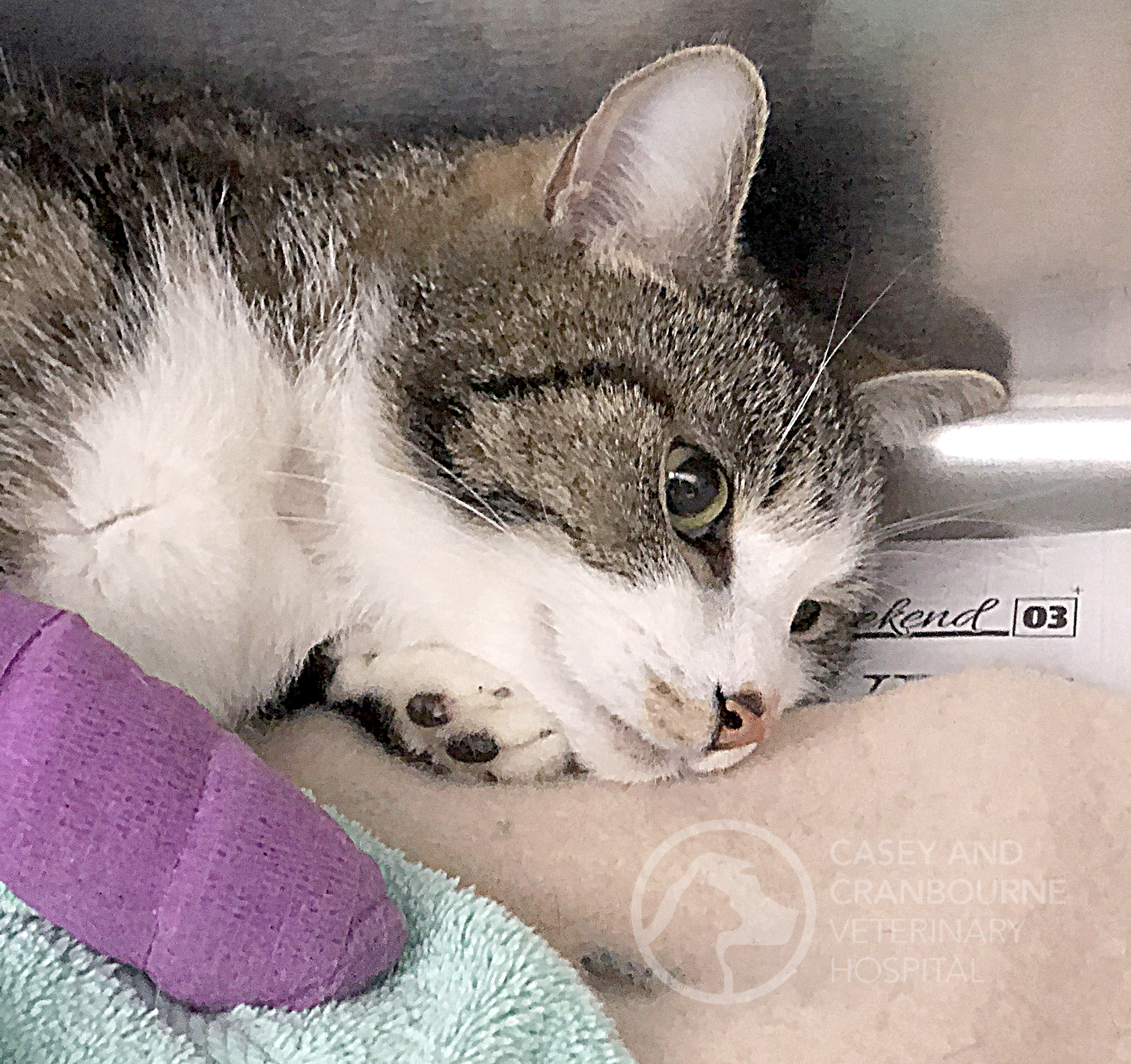 Given Summer is almost upon us, it’s important to detail again the signs to look out for with snake bite envenomation and what to do if you think your pet has been bitten by a snake.

Tiger and Brown Snakes are responsible for most of the snake bites in domestic pets in Australia and the highest incidence of bites occurs between October and February.

Did you know that baby snakes carry enough venom to kill 2 humans, but they have small fangs that make it harder for them to get an effective strike? The Tiger snake venom is slightly more toxic than Brown snake venom.

When snakes bite, they inject venom into their prey, which contains a variety of toxins. The neurotoxin is the most important toxin in the venom of Australian snakes, affecting the brain and causing paralysis. Snake venom also contains an agent that uses up all the clotting factors that would normally help to stop your pet from bleeding. Tiger snakes have an additional toxin that breaks down muscle, causing damage to the kidneys. The signs of snakebite will vary depending on factors such as the type of venom, location of the bite and amount of venom injected. Generally, the closer the bite is to the heart, the quicker the venom spreads to the rest of the body. Dogs, being inquisitive, usually try to chase or kill snakes and are more commonly bitten on the face or jaw. Cats, being hunters and more agile, commonly receive bites on their paws. 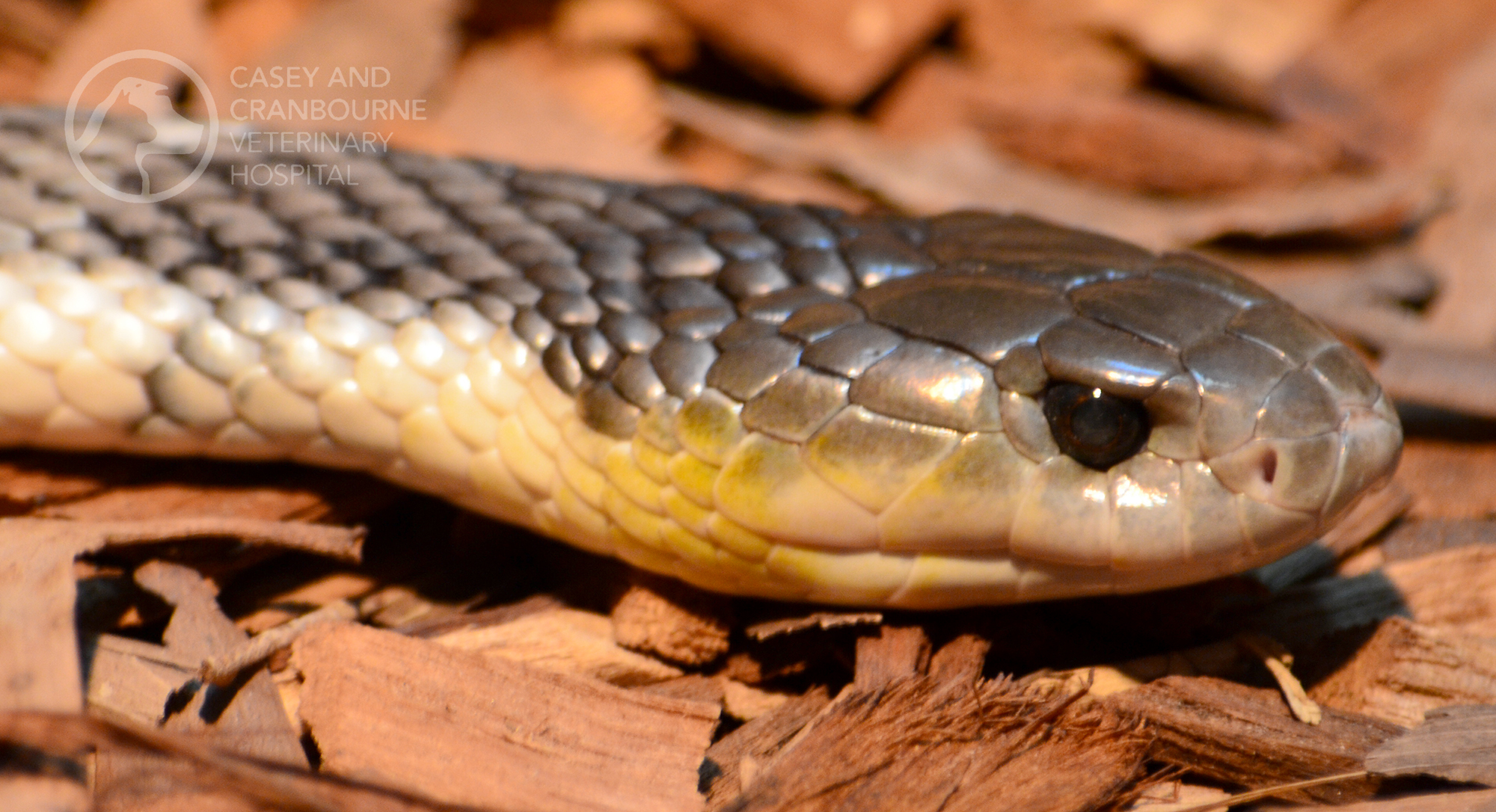 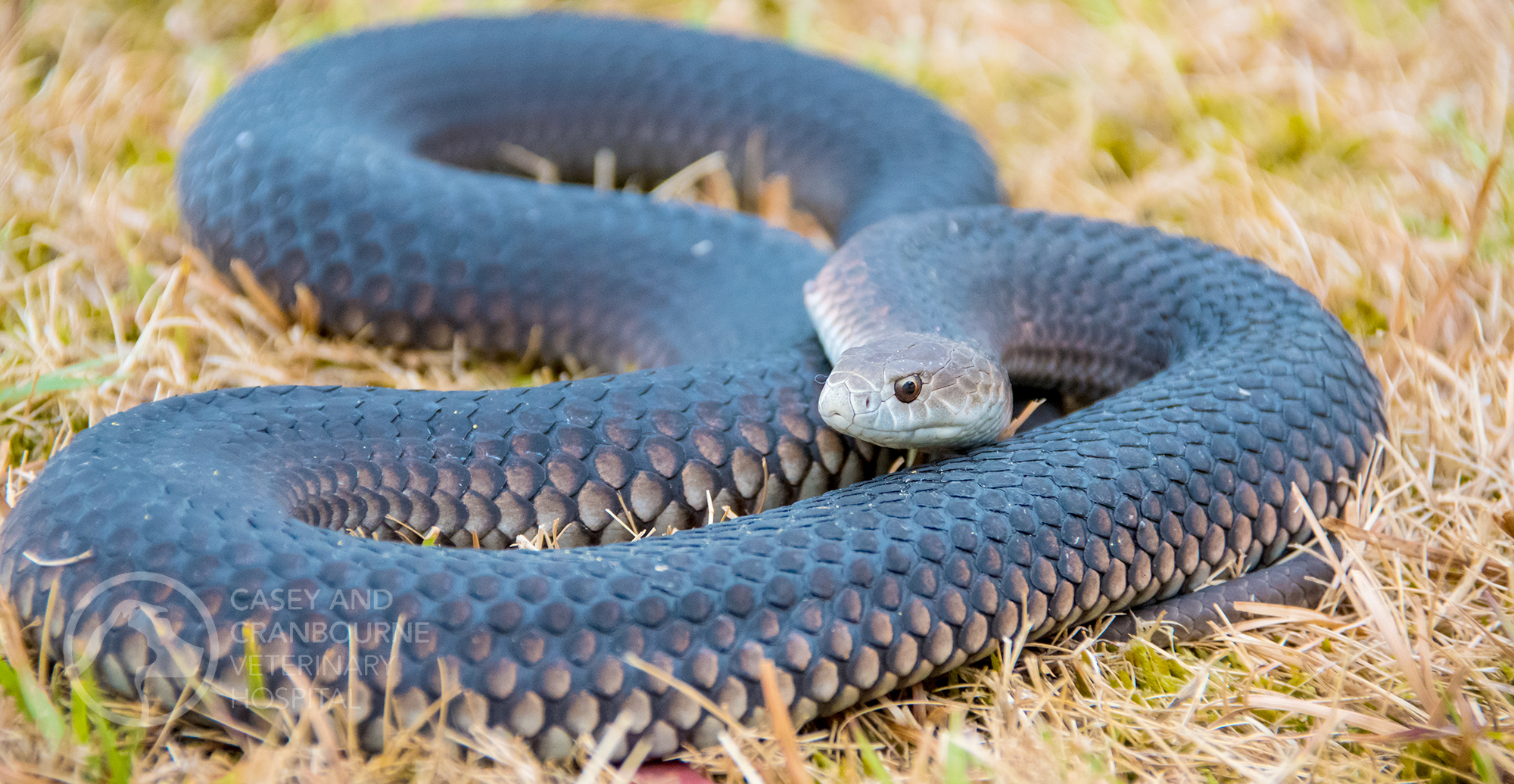 Rapidity of onset of clinical signs following a snake bite is related to the dose of venom received. Generally, onset of signs is faster in dogs (1-6 hours) than cats (15 hours). Additionally, dogs commonly show pre-paralytic signs.

Clinical signs observed in cats vary significantly but often the earliest signs of envenomation include:

These signs are often transient and inconsistent and may not be present. Sometimes cats go missing for a few hours after being bitten by a snake, especially on semi-rural properties and make their way home as they are becoming progressively more paralysed. The flaccid paralysis cats tend to exhibit starts off as weakness and progresses to the cat becoming totally floppy and unable to stand, lying flat out and often unable to lift their head up.

Envenomated dogs can show an even wider array of clinical signs. Pre-paralytic signs are common. Signs of envenomation include:

Owners often report that their dog collapsed shortly after the bite but has since recovered. This is related to the presence of pre-paralytic signs and suggests that a lethal dose of venom has been delivered to the dog. Thus, urgent treatment is required.

If left untreated, dogs can die within several hours of a snake bite but in some situations, death can occur as quickly as 20-30 minutes. Dogs are very sensitive to the toxins in snake venom and always require antivenom if they are showing signs of snakebite, in order for them to survive.

Cats seem to be more resistant than dogs to a lethal dose of snake venom, often lasting up to 45 hours without treatment. With a sub lethal dose of venom, some cats survive without receiving antivenom however it takes a week or more of intensive hospitalisation, fluid therapy and often the placement of a feeding tube for a cat to survive a snake bite without receiving antivenom. This will often add up to a similar cost as if they received antivenom early in the treatment course.

What to do if your pet is bitten:

The first thing you must do is immobilise them. Carry your pet to the car or bring the car to the pet (depending on its size).

When approaching your pet, make sure it is safe to do so, as you may risk being bitten too.

Try not to panic (easier said than done). It is important that your pet is kept as quiet as possible and does not walk or run as this will increase the speed of envenomation. Most dogs and cats will be bitten around the head or front legs but do not waste time looking for puncture wounds as you most likely will not find them. Do not use a tourniquet.

You need to bring your pet straight in to the clinic, we have antivenom on site. Phone the clinic as you are on your way in so we can prepare to treat your pet as soon as you arrive.

Firstly, your pet will be examined to assess the clinical sign they are showing and determine the best course of action. Further diagnostic tests may be required to determine if your pet has in fact been bitten including checking for clotting times and CK (creatinine kinase, a muscle enzyme that goes up dramatically with snake bites). Since the advent of the Tiger/Brown Snake Combo Antivenom, knowing exactly which type of snake has bitten your pet is not as important in Victoria where the most common venomous snakes encountered are Tiger Snakes and Brown Snakes.

Veterinary treatment varies with each individual case, how severe the symptoms are and how rapidly the symptoms progress. Treatment consists of intravenous fluids and the administration of antivenom to neutralise the snake venom in the pet’s body. Some patients require multiple vials of antivenom.  It is important to note that any venom that has already bound to the nerves in the body is not neutralised by the antivenom, the antivenom only works on the venom that is still circulating in the blood. Therefore, it is important that antivenom is given early during treatment.

Other supportive care may also be required – including oxygen supplementation and even breathing for the pet if they are not breathing well on their own.

If your pet is given antivenom for a snakebite, it is only being used to neutralise the snake venom in your pet’s system at that time. It does not protect your pet in future from further envenomation from a snake. Antivenom is not a vaccination or a preventative medication.

Approximately 80% of pets survive snake bite if treated quickly. The survival rate is much lower however for pets that are left untreated, and death can occur.

Recovery from a snake bite usually takes 24-48 hours if the pet receives prompt veterinary attention and the snake bite is not severe. However, some pets will take substantially longer to make a full recovery due to tissue damage to internal organs and will require intensive and prolonged nursing care.

Antivenom
Antivenom is produced by gradually immunizing horses to the venom of a species of snake. The horse’s blood is then collected, and the serum is separated and purified to make antivenom, containing specific antibodies to the toxins in the snake venom.

Snake antivenoms are expensive to produce and have limited shelf life; these factors are reflected in their high costs.

Precautions
Given there is a chance your pet may die as a result of snake bite envenomation and given the cost of treatment, doing everything you can to prevent snake bites in your dogs and cats is far better than the alternative.

Dogs are inquisitive by nature. When exercising them in bushland (particularly near water) or near beach dunes during the warmer months of the year, keep them on a leash.

Cats are naturally born to hunt and stalk anything that moves. This unfortunately can lead to an unpleasant end if they encounter a snake. The best way of protecting your cat is to keep it inside, although very occasionally very small snakes may make their way inside and even the smallest of venomous snakes can still be lethal.

Living where we do, in the outer suburbs of Melbourne, surrounded by semi-rural and rural areas and plenty of man-made and natural waterways, there are often encounters with Tiger snakes and Brown snakes. It’s important to keep your backyard clear of long grass, and remove any piles of rubbish as this will help to reduce the number of hiding spots for snakes to reside in.

What to do if you find a snake?

Contact a snake removal service or the wildlife helpline.

Remember… if your pet is bitten DO NOT try to catch or kill the snake, all Australian snakes are protected, and you may expose yourself to unnecessary danger.