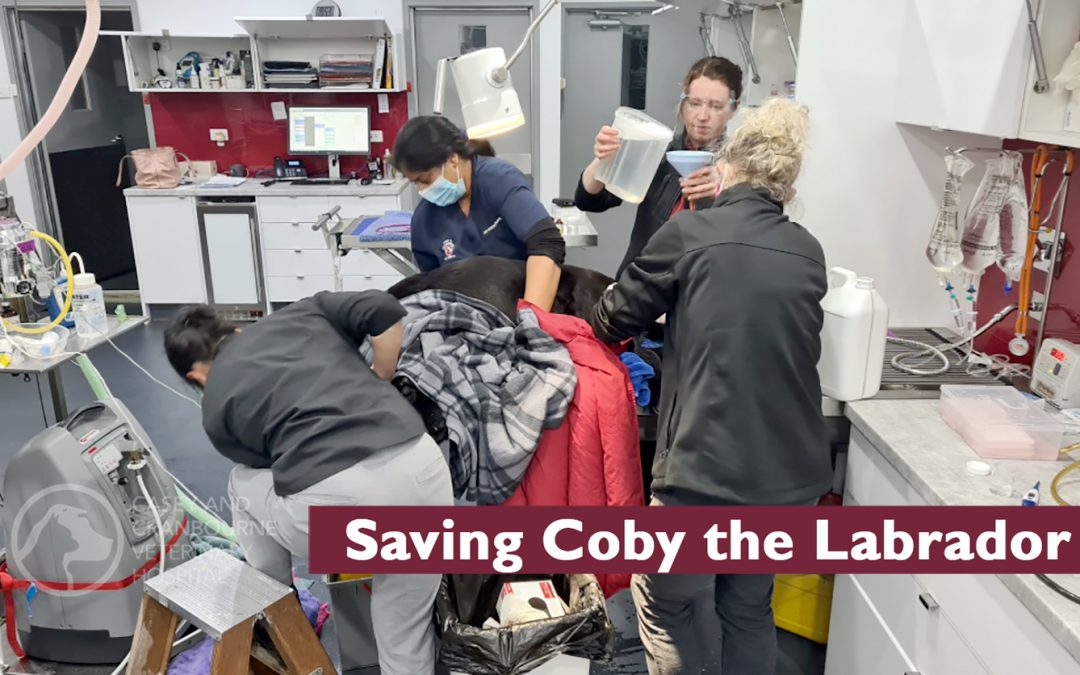 The Story of Coby the Labrador

We have had our first case of snail bait poisoning for the Spring, a 6 1/2 years old male Labrador called Coby. His owners found the snail bait packet ripped open and contents missing so they rushed Coby and their other Labrador Chokka into the clinic.

Apomorphine was given to both dogs to induce vomiting. Chokka vomited and had no snail bait in his stomach. Coby did not vomit but started showing signs of tremoring, so it was determined he had eaten the snail bait. He required emergency treatment to save his life.

The great news is that Coby has made a full recovery, but had he not been brought straight down to the clinic for prompt, aggressive treatment, the outcome could have been a lot different.

Types of snail bait
Snail baits come in the form of pellets, granules, liquids or powders. The poison is mixed with molasses, apple, rice, soybeans or oats. This mixture is what makes it palatable to snails, but it is also what makes it tasty for dogs and cats. The two most common active ingredients in snail baits are metaldehyde (‘Defender’-green pellets) and methiocarb (‘Baysol’-blue pellets).

The pelleted form of these baits closely resembles dry dog food and are extremely attractive to dogs and even cats. Snail bait also comes in liquid or granule form and although these are more difficult for pets to consume, they can get them on their paws and lick them off during grooming.

The third type of snail bait found in Australia is one that contains iron-EDTA (‘Multiguard’-red pellets).

It is important to note that even so called ‘pet friendly’ products are dangerous for animals.

Metaldehyde (‘Defender’) and Methiocarb (‘Baysol’) toxicity
Once ingested the clinical signs of toxicity develop rapidly, sometimes within an hour of ingestion. Initially, your pet may simply show some mild twitching and an unsteady gait. Some animals will also salivate or vomit. A lot of owners make the mistake of ignoring these early, relatively mild clinical signs, hoping that they are only transient, rather than seeking veterinary attention.

If left untreated, affected animals will begin to exhibit severe, generalised tremors, followed by seizures. The muscle contractions of the twitches increase the body temperature so high that brain damage can result, leading to coma and death.

Iron-EDTA (‘Multiguard’) toxicity
Multiguard is less toxic than the other 2 snail baits (Defender and Baysol) but iron toxicity can still be fatal and therefore treatment is recommended even if a small amount has been eaten.

Iron EDTA (red) snail bait toxicity can cause liver failure as animals are unable to remove iron which has been absorbed from the gut and high levels of iron can damage the liver and other organs. After eating snail bait containing iron EDTA, dogs will commonly vomit within minutes to hours. They may also have diarrhoea which may contain blood. Improvement may be noted for the next 1-4 days HOWEVER without treatment, lethargy, vomiting, diarrhoea, shock and liver failure subsequently develop which may then progress to death. Early treatment of iron EDTA ingestion provides the best outcome as the toxicity can be reversed. If treatment is delayed until liver failure develops, the chance of recovery will be much lower. 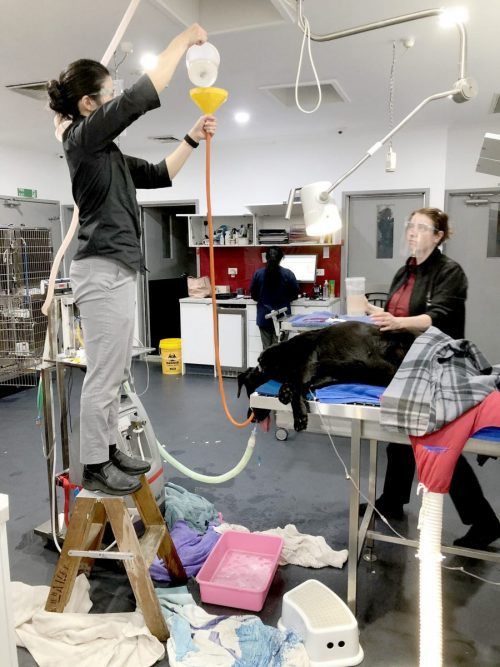 Treatment
Unfortunately, there is no direct antidote for metaldehyde (“Defender”) toxicity; treatment is aimed at controlling the clinical signs. This usually involves anaesthetising the dog for an extended period of time until the seizures stop. Methiocarb (“Baysol”) toxicity requires a drug called atropine to be administered intravenously in order to counteract the poison’s effect on the nervous system of the dog.

If the patient is conscious, not tremoring and ingestion has occurred within 4 hours, vomiting is induced.

If the patient arrives at the hospital with tremors, then anti-seizure medication and supportive care including fluid therapy is given.

In most cases when the animal presents with clinical signs of toxicity (primarily tremors or seizures), the animal will require a general anaesthetic to help control the seizures and also to perform gastric lavage (involving feeding a tube into the stomach via the mouth and oesophagus and using warm water to flush the pellets and remaining stomach contents out through the mouth) and an enema (involving flushing the bowel contents out the other end with a tube and warm water).

Activated charcoal is then given to absorb any remaining poison in the system so that it can be safely excreted.

Treatment for dogs who have ingested snail bait containing iron EDTA (red) includes supportive fluid therapy, gastric lavage and an enema to remove as much of the poison as possible and in severe cases, treatment to chelate (bind) the iron.

IMPORTANT FACT: Very little snail bait is required to cause poisoning (about 1 teaspoon per 5kg bodyweight) and it can cause death in up to 50% of cases. The best advice we can offer is if you have snail bait in your garage cupboard even up high where you think your pets can’t reach it – THROW IT OUT. 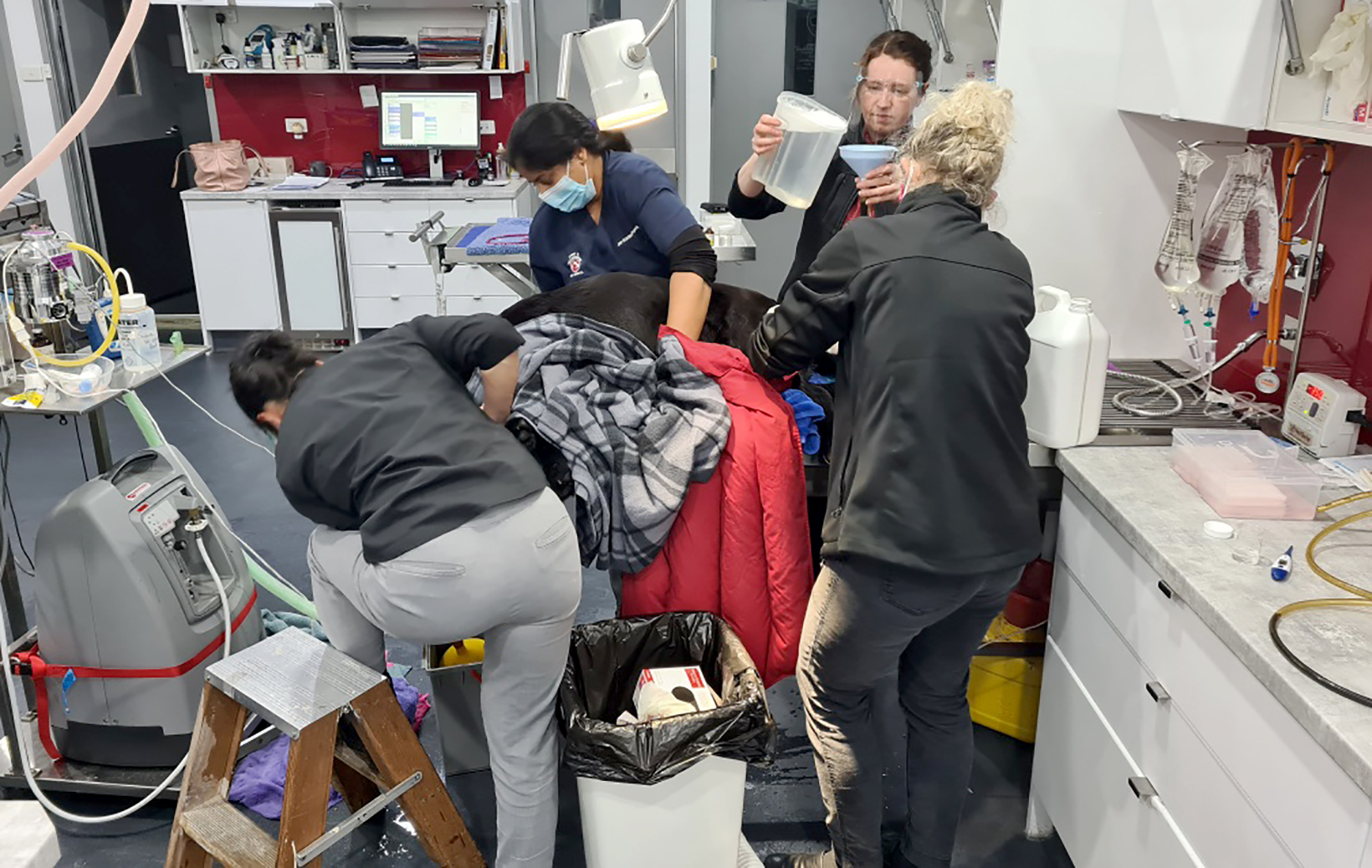 Prognosis
There are many factors that can influence the prognosis if your pet ingests snail bait. These include how much was ingested, how quickly appropriate treatment is initiated and individual patient health. However, if prompt, aggressive treatment is given, the prognosis is good.

Signs may last for a number of days and hospitalisation will be required for severe poisoning.

Follow up and aftercare
Animals may go home with a course of activated charcoal to continue absorbing any remaining poison in the system.

Repeat blood tests are recommended a week after recovery to check for any liver damage.

Remember
Don’t use snail baits if you have pets. If you must use snail bait, please keep the packaging locked away where pets cannot get access. Don’t allow your pet into areas where it is used.

If you suspect your pet has ingested snail bait, seek immediate veterinary treatment. It is important to bring any packaging to the clinic with your pet, so that we can determine the active ingredients and what type of poison was used.